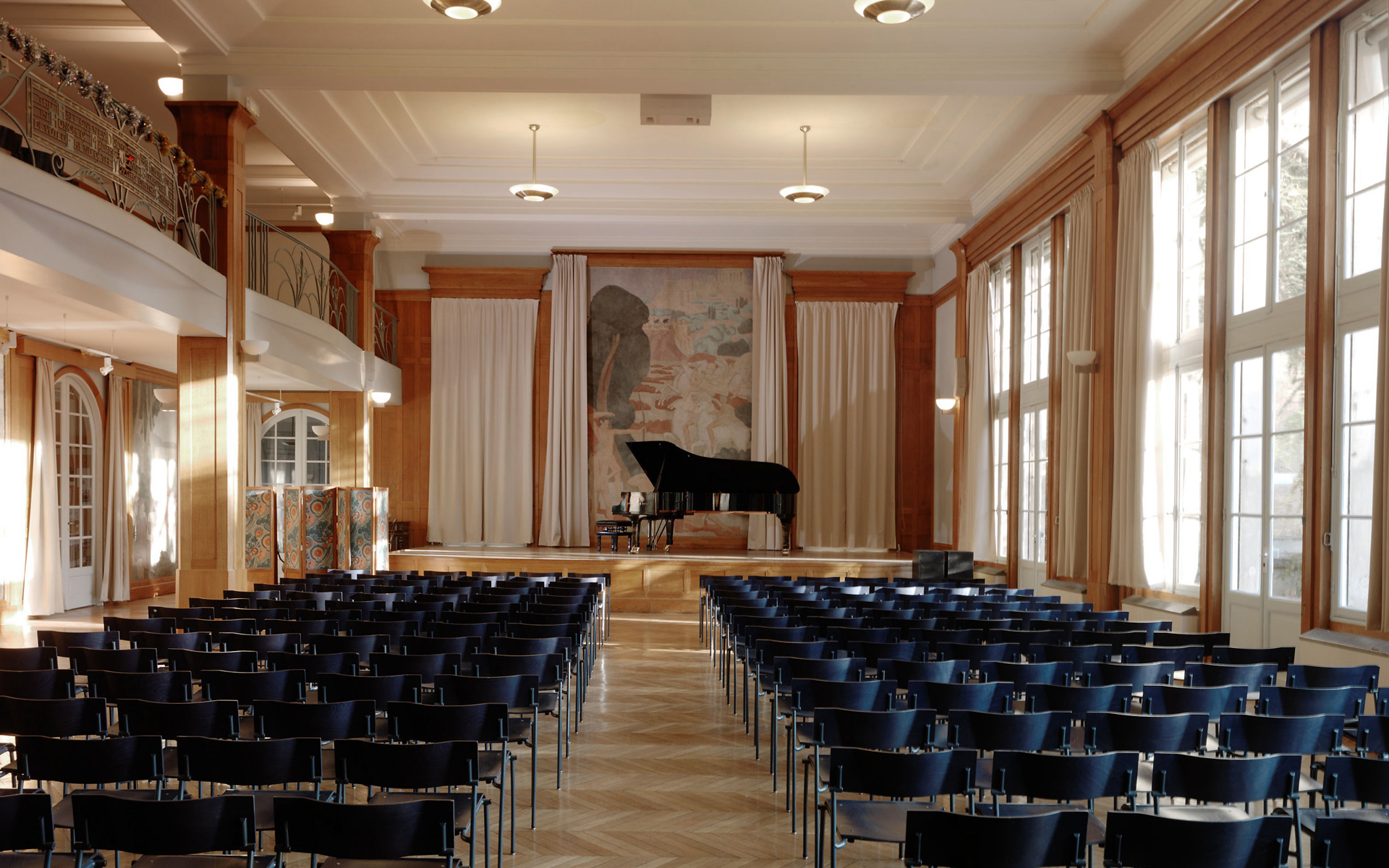 From 1985 through 1999, En Garde Arts produced ambitious, large scale theatrical work using the city as its stage transforming such unlikely spaces as four square blocks of the meatpacking district for Reza Abdoh’s Father Was A Peculiar Man, the courtyard and façade of a former cancer hospital called the Tower’s Nursing Home for Chuck Mee’s Another Person is a Foreign Country, directed by Anne Bogart; the intersection of Wall and Broad Streets in the financial district for a new musical by Jonathan Larson called JP Morgan Saves the Nation; and a twisted metal pier jutting out into the Hudson River for Chuck Mee’s Orestes directed by Tina Landau. The arrival of twins led Hamburger out west to found and run Creative Entertainment, a global division for Disney, for nearly nine years, but with the conclusion of this chapter, she returned to New York to relaunch En Garde Arts. It’s second incarnation began in 2014 and continues today. Her missioned broadened to include work in theatres; including the multi-media shows BASETRACK Live, a show about the impact of war which toured to 40 cities around the country and premiered at BAM; and Wilderness, co-written by Hamburger, about teenage mental health issues, which premiered at prestigious venues including the Kennedy Center. It was published by Dramatists Play Service.

All the shows that have been created not only focus upon what stories are told but on how they are told, where they are told and to whom. In 2020, En Garde produced Fandango for Butterflies and Coyotes by an all Latinx team about undocumented immigrants, that was shut down due to covid and returned to New York in 2021. En Garde’s most recent production created in May, 2021 during the pandemic was A Dozen Dreams, an immersive theatrical production, co-created by Hamburger with John Clinton Eisner and Irina Kruzhilina, that brought the pandemic dreams to life of a dozen women playwrights through sets, lights, video and sound. It was created in an empty store at Brookfield Place in downtown Manhattan and played to sold out audiences and critical acclaim. Its physical structure accommodated covid regulations with only two audience members at a time experiencing each of the dozen rooms created. Hamburger has been the recipient of a Lee Reynolds Award and En Garde Arts has received OBIES, Drama Desk and Outer Critic’s Circle Awards.

He was appointed Officer of the Order of the British Empire for Services to Drama in the 2008 Birthday Honours List and was made a fellow of The Royal Society of Literature in 2018. His most recent plays include The National Theatre productions of Death of England and Death of England: Delroy (both co-written with Clint Dyer); Sucker Punch, The Firm, Soul: The Untold Story of Marvin Gaye, Days of Significance, Angel House, Fallout, Sing Yer Heart Out for the Lads, Clubland, The Gift, Starstruck and The No-Boys Cricket Club.

Roy Williams, OBE, worked as an actor before turning to writing full-time in 1990. He graduated from Rose Bruford in 1995 with a first class BA Hons degree in Writing and participated in the 1997 Carlton Television screenwriter’s course. The No Boys Cricket Club (Theatre Royal, Stratford East, 1996) won him nominations for the TAPS Writer of the Year Award 1996 and for New Writer of the Year Award 1996 by the Writers’ Guild of Great Britain. He was the first recipient of the Alfred Fagon Award 1997 for Starstruck (Tricycle Theatre, London, 1998), which also won the 31st John Whiting Award and the EMMA Award 1999. Lift Off (Royal Court Theatre Upstairs, 1999) was the joint winner of the George Devine Award 2000. His other plays include: Night and Day (Theatre Venture, 1996); Josie’s Boys (Red Ladder Theatre Co., 1996); Souls (Theatre Centre, 1999); Local Boy (Hampstead Theatre, 2000); The Gift (Birmingham Rep/Tricycle Theatre, 2000); Clubland (Royal Court, 2001), winner of the Evening Standard Charles Wintour Award for the Most Promising Playwright; Fallout (Royal Court Theatre, 2003) which was made for television by Company Pictures/Channel 4; Sing Yer Heart Out for the Lads (National Theatre, 2002, 2004), Little Sweet Thing (New Wolsey, Ipswich/ Nottingham Playhouse/Birmingham Rep, 2005), Slow Time (National Theatre Education Department tour, 2005), Days of Significance (Swan Theatre, Stratfordupon- Avon, 2007), Absolute Beginners (Lyric Theatre, Hammersmith, 2007), Joe Guy (Tiata Fahodzi/Soho Theatre, 2007), Baby Girl (National Theatre, 2007), Out of the Fog (Almeida Theatre, 2007), There’s Only One Wayne Matthews (Polka Theatre, 2007), Category B (Tricycle Theatre, 2009) and Sucker Punch (Royal Court, 2010). He also contributed A Chain Play (Almeida Theatre, 2007) and Sixty Six (Bush Theatre, 2011). His screenplays include Offside, winner of a BAFTA for Best Schools Drama 2002. His radio plays include Tell Tale, Homeboys, Westway, which was broadcast as part of Radio 4 First Bite Young Writers’ Festival, To Sir with Love, and The Interrogation. He also wrote Babyfather for BBC TV.

Her play Is God Is (directed by Taibi Magar at Soho Rep/Ola Ince at the Royal Court) won the  Relentless Award, an OBIE for playwriting, the Helen Merrill Playwriting Award and was a finalist for the Susan Smith Blackburn Prize. What to Send Up When It Goes Down (directed by Whitney White at The Movement Theatre Company), was featured in American Theatre Magazine and received a special commendation from the Blackburn Prize. The play was subsequently re-mounted at Woolly Mammoth, A.R.T., BAM and Playwrights Horizons. Her newest play, On Sugarland (directed by Whitney White) premiered at New York Theatre Workshop in 2022.

Her plays have been presented at Playfest at the Orlando Shakespeare Theater, the Edinburgh Festival Fringe, the Harriet Tubman Center for Social Justice, California Institute of the Arts, VOXfest at Dartmouth College in New Hampshire, and the Comédie de Saint-Étienne-National Drama Center in France.

Her research explores how theatre and performance artists make their work, and the cultural politics of performance, focusing especially on urban inequalities, gender, and sexuality. Her publications include: two books with queer artists, Scottee: I Made It and The Only Way Home Is Through the Show: Performance Work of Lois Weaver, and the monographs Fair Play – Art, Performance and Neoliberalism, Theatre & the City, Staging the UK, and the co-authored Routledge Companion to Theatre and Performance. She co-edited Making Contemporary Theatre: International Rehearsal Processes and three special issues of Contemporary Theatre Review, on feminisms, the cultural politics of the London 2012 Olympics and Paralympics, and globalisation. She has published several articles on the Edinburgh Festival Fringe.

She is currently co-editing The Cambridge Companion to British Theatre Since 1945 and writing a monograph on how gendered inequalities in housing, care, and employment are manifested in and addressed by recent feminist performance in the UK. She co-edits the book series Theatre &, now with Bloomsbury (formerly Palgrave Macmillan), and releases open access interviews with performance makers on her podcast Stage Left (soundcloud.com/stage_left). https://www.qmul.ac.uk/sed/staff/harviej.html.

He studied English at Cambridge where he was director of the touring European Theatre Group, and was awarded a high first for dissertation work on Tennyson. He qualified as an architect in 1995 at the University of Pennsylvania, where he studied with Ivan Illich, Joseph Rykwert and David Leatherbarrow.

Upon graduating he moved to Paris where he gained professional experience in Jean Nouvel’s office; at the same time he was a correspondent for Giancarlo de Carlo’s review Space and Society. In 1996 he met the legendary director Peter Brook, who invited him to collaborate on a research project which became the book The Open Circle – Peter Brook’s Theatre Environments (published by faber and faber in 2003). Todd has subsequently published a second book of essays on scale, conviviality, domesticity and ecology: Common Sense – Building a World to Share (RightAngle International, 2016).

He has written for The Guardian, Financial Times, Architecture d’Aujourd’hui, Architectural Review, The Enthusiast, Tracés and Parametro, and has appeared as a commentator on BBC World News and Today, France Culture and France Inter.

Andrew remains active as a researcher, writer and teacher. He has taught and lectured throughout Europe, North America and in India and Japan. He is currently engaged in book-scale research projects on trees, on rhythm, on Shakespeare and on the theatre paradigm in contemporary architecture; he is a jazz drummer playing and recording at professional level.

He is familiar with many of the leading global creators in the performing arts and music, and works regularly with them on research, discussion, debate and design projects. His closeness to the sector and the possibility to listen intimately to its concerns deeply informs his creative work as an architect.

In 2011 he was named Chevalier des Arts et des Lettres by the French Minister of Culture Frederick Mitterrand, for his services towards the synthesis of the arts.

During her academic career she has been teaching as visiting professor in Italy, Germany, France, Spain, USA and China. She is the Director of the Research Center UMR AUSser, in the framework of the French Scientific Research Center (CNRS).

His research covers contemporary concepts of dramaturgy, performance studies and digital cultures, socially relevant functions of art and concepts of spectatorships. In his career as a Dramaturg (Theatre, Dance, Opera) he collaborated with William Forsythe, Jérome Bel, Luk Perceval and others. He has a long-term working relationship with Rimini Protokoll.